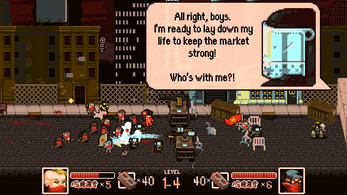 Tonight We Riot is about as unsubtle as a brick to the side of the head in regards to what it’s trying to say.

That said, this game is so wildly fun that it will fall into the Rage Against the Machine territory, where someone shows their complete lack of understanding about anything by decrying the company’s politics on some sort of social media platform ignoring the very evidence before their eyes.

Mark it for 2023 since the game just came out in 2020. My hope is that the world will change, and I think if people keep up the pressure it will, but there are enough privileged entitled people that someone is going to say that. 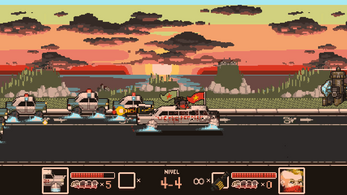 Enough about some whiny, privileged fool in the future. Let’s talk about this game, because it is a riot. It is sometime, and someplace, where the workers have decided that they have had enough of their capitalist overlords and are rising up. Your job is to be one of the people in the movement fighting for your freedom. If something happens, like a riot cop beats you up or you get cut down by chainsaw wielding boot-lickers, you simply take over as another member of the movement.

You’ll fight riot cops, tanks, boot-lickers with chainsaws, giant mechs, incredibly wide and resilient woodchippers, and robot fists only armed with weapons that come to hand. You’ll free your comrades from their collective toil, and fight to take back what’s your life for yourself and your compatriots.

The music and sounds are fantastic, there are all the little details in the game that just hit that spot. My personal favourite are all the newspaper clippings just before you play a level. But also that it’s got that lovely old school feel without any of the problems that come with an old school game.

Buy at on Itch.io and Steam.