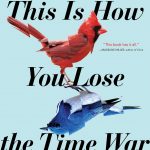 I hope this letter finds you in good health, and heart. I spent a long time wondering about the format of this review. I hope it fills you with some kind of delight, much like This is How You Lose a Time War filled me with an unspeakable joy.

Part of that, dear IP, is that I am a sucker for things like epistolary novels. Much like my love of concept albums and theme nights at hockey games. There is something about two characters writing to each other over time that I enjoy. It’s an interrupted view, an acceptable internal monologue, that provides you detail that would bore you if people were speaking it to each other.

That’s the joy of This is How You Lose a Time War. Yes it is a time traveling story. Yes it is a story between two sides of a conflict. But at its heart, it is a love story and I can’t stop thinking about it.

The two sides of this time conflict seem to be a biological side, whose agent goes by Blue, and a technological side, whose agent goes by Red. Each side is certain that their way is the true way, and they are affectings things in different threads to bring them closer to their timeline, closer to making their ending the reality. Each side has its own mentality that drives it to believe that only their future is the right future, and everyone else is the enemy. They reach through the strands of time, changing events to flip history in their direction. Sometimes it’s starting a war when there wouldn’t be one, or it can be as innocuous as cutting down a particular tree, or growing a particular plant. There are even crucial moments in time that seem to be fought over again, and again.

But let’s not talk about Atlantis.

But what really matters is that Blue and Red, two of the most effective agents on either side, find each other. It starts with the appearance of mutual respect. It’s the liberation that comes with finding a peer, colleague, or even a rival. From there it grows into a beautiful love story in letters written between Red and Blue found in things like the rings of trees, the juice of a berry, or even the rubble of war. I enjoyed how they crafted their letters almost as much as what the characters wrote to each other.

My feelings for them grew as theirs did, dearest computer, to the point where at the end of the book I was in tears flipping through every page.

Here are some points to be aware of my 192.168 before reading or recommending this book to others.

The book can be confusing at times, it’s at best to let the feeling of having to fully understand go because the technology is fantastical, and the timelines are strange, and things are in chronological order for Red and Blue but not for anything else.

While the book isn’t bloody by any stretch of the imagination, the whole premise is of a war. There is a lot of fighting that happens around Red and Blue, and even a point where someone kills themselves intentionally.

I hope, my dearest IP Address, that I have conveyed my sincerest love of this book.

Please try it, so that we may cry together.