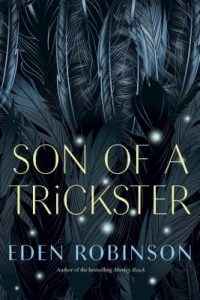 There is something to be said for expectations. When I see a book labelled under things like fantasy or young adult, I think I know how the book is going to go. Not because I’m some kind of savant, but there is a weight of historic structure around these types of stories. It’s not quite Campbellian, but it’s kind of close to that. You’ve got a young hero who feels out of place, they find out they’re special, and then they use that specialness to change their world.

It’s not bad, it just kind of is a thing, particularly in the straight, cis, white YA fiction that frequently gets turned into movies. There’s a rhythm to that storytelling.

Which is one of the reasons why I loved Eden Robinson’s Son of a Trickster. When I read the back of the book, I had those expectations on the cadence of the story. But Robinson doesn’t have any interest in that narrative. Instead Son of a Trickster is very much a personal quest with some very personal changes that drive the story. Then, on top of that sites this amazing magical life that provides an extra level of colour, of realness that makes this a phenomenal book.

That story focuses on Jared, a young boy who grows up in a boarding house in Kitimat, in North West corner of BC close to the Alaskan border, with his mom who is partying to hide from her own problems, and a dad who used to be there but after an injury has become dependent on milking his son for support. He tries to do the best he can by his family, but they aren’t really in a spot to help him. His mom tries the best she can, but she’s got very much a shotgun approach to parenting, which is less a scattered approach and more involving actual shotguns.

Jared tries to live his life where he can, selling pot cookies for some money to support his family, drinking and partying with his mom, or his friends, going to school … and then he kind of wakes up to his magic. It isn’t some great moment where lightning strikes, or the sun parts and he’s anointed with a ray of light. No, he hears animals talking to him and he finds out that the voice in his head isn’t an internal monologue.

You see, his mom fled her own family because her mother thought that Jared was evil, that he was the son of a trickster and that he would only cause pain. He doesn’t know about magic, or anything like that, until animals start talking to him and his next door neighbour’s granddaughter, Sarah, who has a host of very wordy fireflies that follow her around.

What I loved was how everyday the story feels despite the extraordinary things that are happening to Jared. There isn’t some grand sense of the world ending, or a giant calamity that’s being avoided,  or the very fate of the world at stake. Jared spends his time figuring himself out, in the same way so many people do. Navigating his family full of diamond hard old hurt feelings, and his friends who have their own issues, concerns, and problems. Everyone is filled with their own beautiful, fractured, uncertainty. Some are aware of the magical world, some are not, but they’re all dealing with their lives in the best way that they can. Because at heart Jared is a kind and generous person, and it shows in the way that he wants to take care of people. From those who try to give back like his neighbour Mrs. Jacks, to his dad who takes advantage of his nature, to his mother who wants to protect him with violence which is the only way she really knows how.

This makes the moments when the magic takes centre stage all the more frightening and important. Sara’s frightening descent into her own magic, Jared’s grandmother’s pleasant façade hiding her powerful menacing strength, and even the absent parent relationship that exists between trickster and son. It all has an extra pop because of how normal everything else feels.

Robinson reinforces this with the simplicity in the language. I say simplicity not because it’s bad, but the words are beautifully straight forward. It doesn’t get bogged down in trying to be too much of anything, which is a problem I have with a lot of other books with any kind of magic. The authors are too busy trying to make something feel important, the language obscures what’s going on and I end up having to re-read the same passage four times or more to understand what’s happening. This never happens in Son of a Trickster, and I always felt completely immersed, and in awe, of every mystical thing that goes on in the book even when it’s kind of horrific, or maybe especially when it’s horrific. There isn’t a language buffer between me as the reading, and what’s happening in the story.

Another added another layer of interest, was that Son of a Trickster provided me a perspective of First Nations from a different part of the land. I am a settler who grew up on Anishanaabek territory (Treaty 61, Robinson-Huron) and am currently living on Huron-Wendat and Haudenosaunee territory (Treaty 13, Toronto Purchase). Most of the stories that I’ve read, or authors that I’ve studied tend to be Anishanaabek, Cree, or Mohawk. My partner, she grew up in Mi’kmaw territory (Treaty Of Peace and Friendship) and so I’m being exposed to more information there. I mean, it’s all settler type knowledge so I need to look things up all the time (native-land.ca is an amazing resource). They key part is that as someone living in Ontario, I’ve never had any real information about West Coast Nations, and it’s a good perspective.

Here are some things you might want to be aware of before reading, or recommending this book to others.

There is a lot of violence that happens in the book, either because it’s happening in the narration or it’s happening because someone talked about it. It ranges from light amounts of violence, the kind where students just have a fist fight in a highschool to people reacting to violence against children by an angry parent.

Oh yeah, there is a fair bit of violence against children.

There’s a lot of drug and alcohol consumption. It’s a big part of how Jared’s mom hides from her own issues, but Jared uses it in the same way and sells pot cookies to make money to help support his dad.

There is one point where Sarah is trying so hard to get to her magic, that she discovered with Jared, that she hurts herself terribly and is hospitalized for it. The scene that they discover the next day is full of blood and the description is appropriately stomach churning.

It completely subverted my expectations and kept me engaged in not just during any magical events, but in all of Jared’s life. I was rooting for Jared for everything, to find love, to understand what’s going on, to maybe meet his extended family, and to grow beyond what even he thought he was capable of.